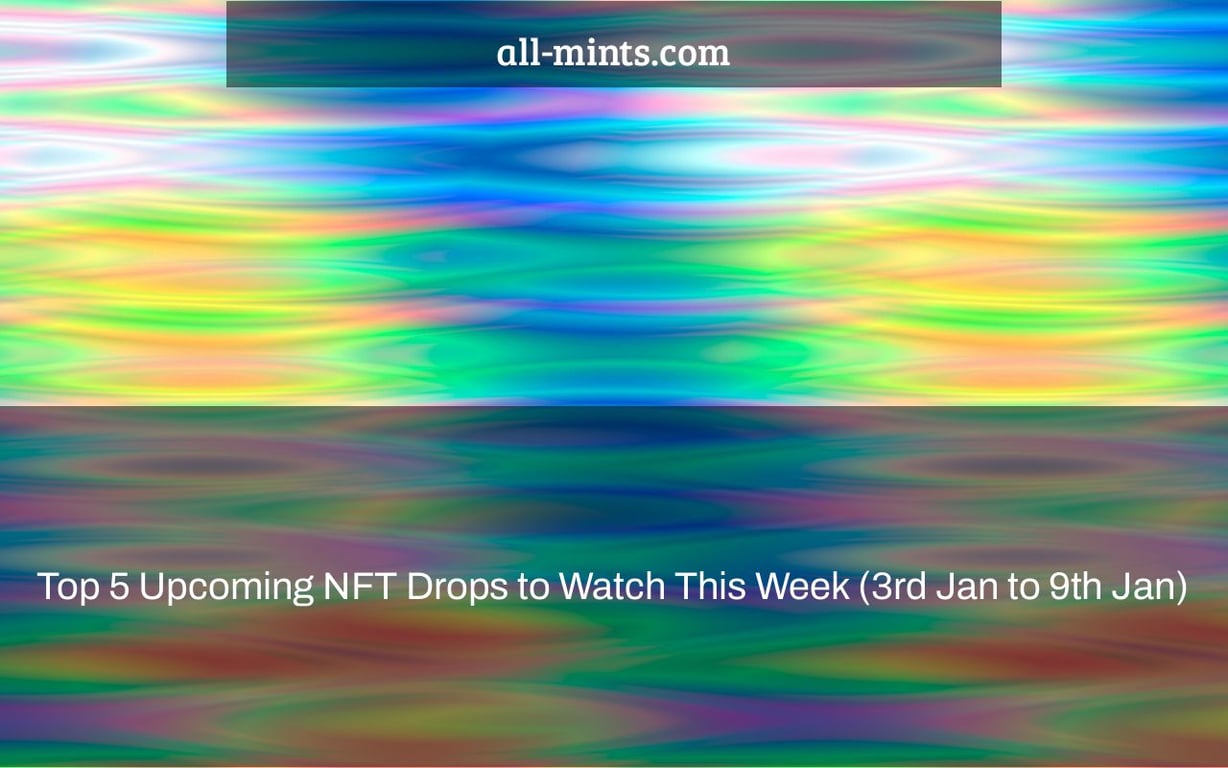 This week is a big one for NFTs with the launch of WETH, and other exciting games coming out. There are 5 different drops that have been announced that you should be looking out for this week!

The NFT market is growing, with more over $700 million in sales in the first three days of 2022, while the crypto market is hardly making a move to the upside with bitcoin failing to claim a $53k support band. If the current trend continues, January might be another record month for the Open Sea marketplace. As a result, it’s fair to say that NFTs are making a comeback in a major manner.

The Bored Ape craze is a key contributor to increased trade volumes and capital inflows. Both BAYC and MAYC’s floor prices have risen by more than 40% in less than three weeks, placing them at 70 and 16 ETH, respectively. Furthermore, these generative ape NFTs are gaining in prominence as a result of a big surge of interest from celebrities to businesspeople. A Bored Ape was acquired by Eminem, a worldwide music celebrity, for approximately $500,000. Dave Chapelle, a fan favorite comedian, also received a six-figure BAYC NFT.

It’s not only the most expensive collections that are skyrocketing in price. We’re witnessing a rise in the market as a whole. The recent airdrop of $WRLD tokens by NFT world was a welcome surprise. Alien Frens, Coolman’s Universe, inBetweeners, and Prime Ape Planet are a few additional recently released collections that have risen to the top.

In the foreseeable future, the NFT market is poised for a major surge. Money will pour into NFTs as the crypto market consolidates, and new ventures with tremendous potential will provide excellent returns. The top 5 NFT collections with strong communities and utilities for their owners are included in this weekly list. Let’s get this party started.

Oxya Origin is one of the most anticipated projects in the NFT market, and it will be released this week. They were able to develop a strong and enthusiastic community by gaining a large following on social media channels. I chose this project partially because of their social presence in the NFT community, but mostly because the Oxya Origin core team has a lot of expertise.

The painters Maxime Delcambre and Laury Guintrand have collaborated on a number of major cinematic projects, including Avengers, Witcher, Robin Hood, and The Fantastic Four. Another artist working on the Oxya Origin characters is Gaotan Simonot. He formerly worked for Ubisfot and One Piece, as well as contributing to Arcane, one of Netflix’s most popular animated programs. Even the project’s other team members are familiar with NFTs and web three principles.

Oxya Origin’s idea is especially unique when compared to other NFT initiatives that simply concentrate on generative art. These NFTs provide so much value to their owners that it is unlikely to be a hype-driven initiative. The Oxya Origin roadmap is rather extensive. NFT holders will gain long-term value thanks to a sustainable token system and land utility. The ultimate objective would be to link metaverses together and reward participants with missions and land rentals.

I’m really looking forward to seeing how CryptoBatz turns out. Not just because it was written by Ozzy Osbourne, a well-known vocalist and composer who was also a member of the Black Sabbath rock band. CryptoBatz has received a lot of attention as a result of his celebrity status. However, I believe that few people are aware of this project and how unique the artwork and functionality are.

Ozzy and a firm named Sutter Systems collaborated on the CryptoBatz collection, which contains of 9,666 NFTs. People admire work that has historical relevance written all over it in the NFT environment. Collectors also wish to acquire works by well-known artists and worldwide giants. One such personality is Ozzy Osbourne. People will purchase these NFTs in a heartbeat since he was a renowned rock hero for decades. 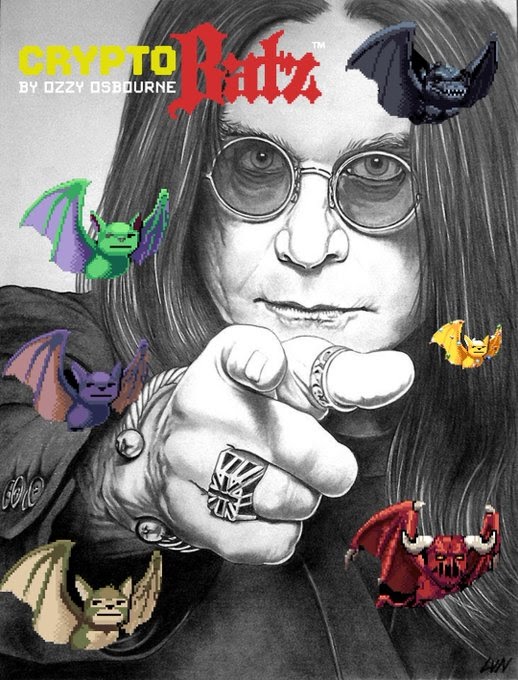 Furthermore, every CryptoBatz owner will be immediately entered into a lottery to decide the winner of a one-of-a-kind Ozzy art work. In terms of usefulness, I believe the notion of mutation will appeal with the NFT community. In essence, owners of CryptoBatz will be able to modify their bat with any other NFT or blue-chip project in their wallet to create a one-of-a-kind type NFT.

Supergremplin has designed three legendary NFTs that will be minted at random, speaking of one CryptoBatz. They are the creators of crypto toadz, so having them on board lends a lot of legitimacy to the project, and the NFT community will almost certainly rally behind it.

Cool Cats in the Metaverse, No. 3

Cats are quite popular in the NFT community. Metaverse Cool Cats is a one-of-a-kind NFT collection with 9,999 lifelike avatars. By deploying cats into the metaverse, the team hopes to incorporate the VR aspect of NFTs to this project.

Cool Cats in the metaverse are created by VAT laboratories. It’s a group of three entrepreneurs who’ve scaled and delivered NFT ventures before. After the public sale of Metaverse Cool Cats, they offer to give away two additional NFTs for free. That’s with no limit on wallets. This is based on the expectation that NFT owners will not sell or list on markets for at least 30 days. As a consequence, I anticipate a rapid increase in demand, raising the floor price.

Following the public auction, the community will pick which properties to purchase and what social activities to provide for NFT owners. The voting processes will be carried out utilizing a DAO framework, ensuring that everyone has an equal voice in all decisions.

I constantly highlight the significance of community and giving back to holders in my weekly lists. In terms of future whitelist places and secondary sale royalties, Space Bulls is one such collection that aims to maximize value for NFT holders.

The team has been working for over a year and recently had a lengthy conversation with the community to determine a roadmap and future objectives. It’s encouraging to see initiatives take the lead in hosting such events and increasing openness.

With its NFTs, Space Bulls also offers a unique art idea. The owners will essentially get two distinct NFTs, one with a 3D spinning box and the other with an avatar. With intriguing utilitarian ideas and beautiful artworks, Space Bulls created a dedicated community with hundreds of thousands of followers.

Frosties is the last group on this list. I adore the artwork. I think it’s adorable. Despite the lack of excitement and influencer involvement, I feel Frosties is a worthwhile project to consider purchasing. It’s a fantastic NFT for novices who don’t have enough ETH to get started with NFT. I also believe that the metaverse game will be the project’s true value. It’s still too early to say how much value this will bring. But it’s definitely something to look forward to in the future.

The team said that the royalties will be used for floor sweeps and that the price would remain above mint. Once the Discord group reaches 5,000 members, they will raffle off 10 Frosties. With this collection, future staking is also a possibility. We’ll have to wait and see how the public auction goes.

The crypto market, particularly the bitcoin structure, is still exhibiting no indications of revival. In the interim, the NFT markets will experience a major surge, with old projects continuing to grow and new ones finding their place. You may learn more about the initiatives listed above and purchase tickets at a reduced rate. Before you go all in, chat to a few people in the community to check whether everyone is on the same page. It will make it clear where the project is going.

That’s all I’ve got for today. I hope you were able to find something you like. I’ll be back with more NFT collections next week. Stay careful till then, and don’t get into any ventures without completing your homework.

Karthikeya Gutta, a crypto writer and freelance contributor for ItsBlockchain, was born and raised in India. With in-depth analysis and research, he covers many facets of the sector. His enthusiasm for blockchain and the crypto ecosystem stems from his belief that it has the potential to transform the world and benefit millions of people.

The “biggest nft drops” are the top 5 upcoming NFT drops to watch this week. These coins are all expected to go up in value, so it is a good time to buy them now.

How do I know if I have NFT drops?

A: If youre wearing a headset, please check for the notification in game that says You have no more NFT drops.

How can I get NFT for free?

A: You can get NFT for free by playing games like CryptoKitties, Augmentors and MyTime.

How do I promote my NFT?

A: Since NFTs are not a tangible asset, they cannot be promoted or advertised. However, you can use the title of your item as a subtitle in its description to make it more visible on our website